Posted on January 2, 2013 by levhardware 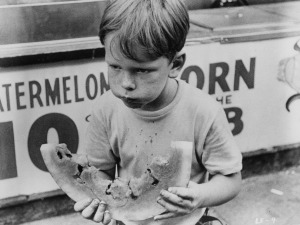 I first saw Little Fugitive while working at the IFC Center in Manhattan in 2009. From the first few moments as Lennie introduces his little brother Joey (“Couldn’t you just kiss him?”) in a thick Brooklyn accent, I was hooked.

The main story of the film is little Joey running away to Coney Island because he thinks he killed his brother. The adventure of this enchanting seven-year-old (played by Richie Andrusco) running away to an amusement park (what kid hasn’t dreamed of that?) is a roller coaster ride of childhood emotions– from joy and excitement to fear and sadness, and even survival instincts.

The hauntingly beautiful images of 1950s Coney Island, with mournful harmonica music, are enough to engage any cinema lover. Combined with the story, and lovingly amusing performances by all the kids (mostly non-actors), this movie had me laughing and crying. I loved it. Afterwards I went home and ordered the dvd online for my little cousins (two flaxen-haired brothers who resemble the boys in the film, but without the Brooklyn accents).
By the way, my younger cousin, Carson (who was 4-years-old at the time) really liked the movie, despite being wary of it at first because it’s in black-and-white.

The whole film is from a child’s perspective, which is part of what gives it such power. As an older sibling myself, I immediately connected with Lennie. Little Joey is always getting his way, messing up his birthday, annoying his friends– it’s a tough life being the older one having to be responsible all the time, especially when your single mom is off working. But as the perspective switches to Joey when he runs away, I can see how the events connect in his young mind, making him feel all kinds of complicated emotions which make him think the only option he has is to run away from home. He loves his brother so much and, in his own way, feels just as responsible for Lennie’s well-being as Lennie feels for him.

This dynamic reminds me of the children’s book, Big Sister Little Sister, which has been a favorite for my sister and me since we were very young. The theme of siblings taking care of each other, not just the older caring for the younger, is so touching and deeply felt. Little Fugitive taps into this universal place, while at the same time showing us the humor, beauty and complexities of life as a child in 1950s Brooklyn.

Here are some quotes about the film I picked up from the Wikipedia page:

When Little Fugitive was screened in New York in 2005, film critic Joshua Land wrote, “Little Fugitive shines as a beautifully shot document of a bygone Brooklyn—any drama here resides in the grainy black-and-white cinematography, with its careful attention to the changes in light brought on by the inexorably advancing sun…Filled with ‘Aw, fellas!’ period ambience and the mythic imagery of cowboys and horses, comics and baseball, it’s a key proto-vérité slice of urban America.”[5]

François Truffaut was inspired by Little Fugitive’s spontaneous production style when he created The 400 Blows (1959), saying long afterwards: “Our New Wave would never have come into being if it hadn’t been for the young American Morris Engel, who showed us the way to independent production with [this] fine movie.”[3]

Critic Dennis Schwartz wrote, “A remarkable indy classic, made on a shoestring budget by a group of still photographers. It’s an affecting lyrical comedy-drama that fully captures the flavor of urban childhood innocence of the 1950s.”[4]

Little Fugitive is screening at Images Cinema as part of our Family Film Series, Saturday January 19th at 10:30am.

I will regretfully be out of town that weekend, so please come and enjoy the screening for me! I love this  movie, and hope you will too. It’s a piece of film history and a beautiful story. A movie your whole family can enjoy together.

PS – Here’s a neat cartoon review of the movie by The Comic Critic.